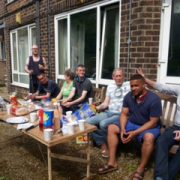 Pictures from our BBQ: 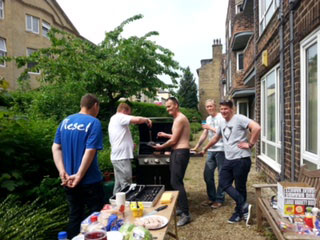 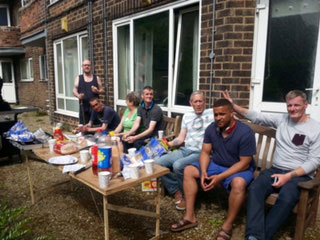 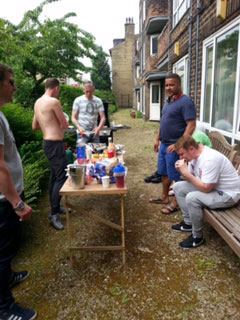 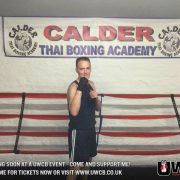 Ultra White Collar Boxing (UWBC) is a unique opportunity for people with no boxing background to experience the wonderful world of boxing, in a safe and enjoyable environment. Raise money for Cancer Research UK and Get In Great shape!

This is Carl getting ready for his tournament: 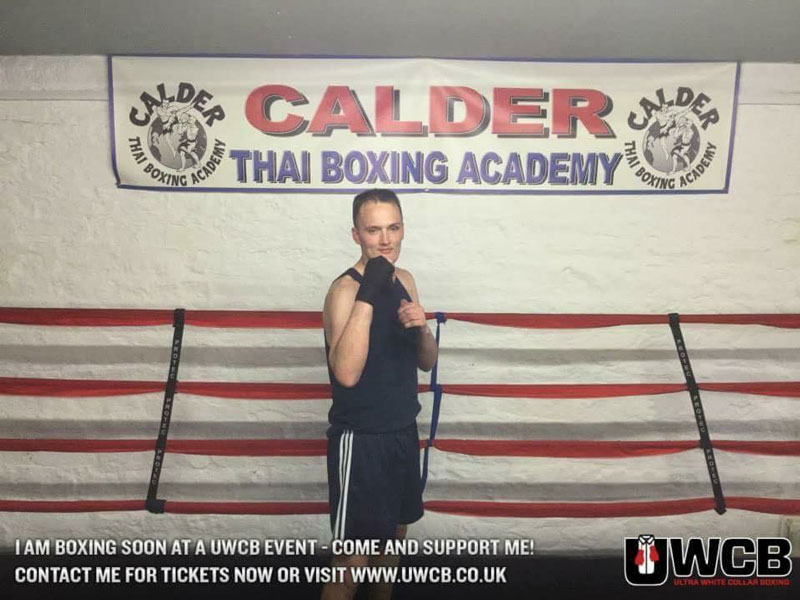 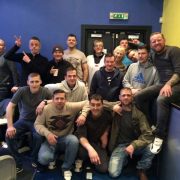 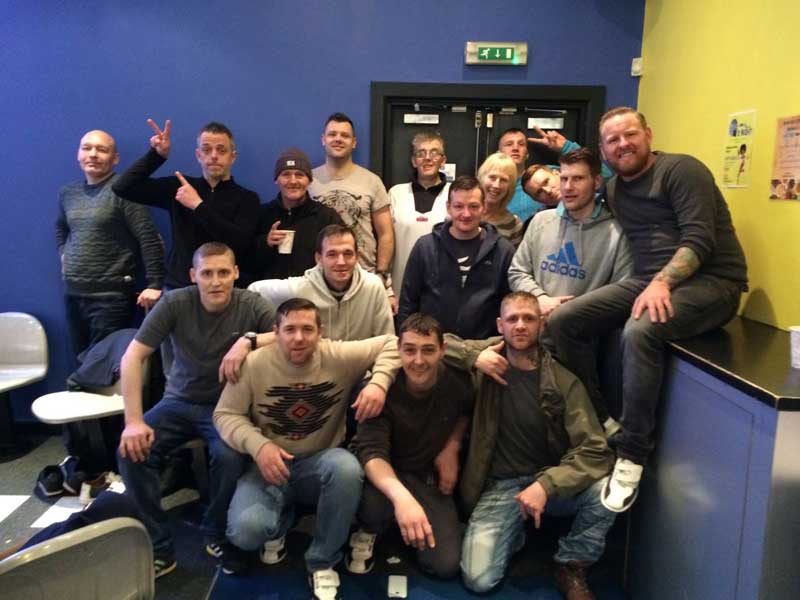 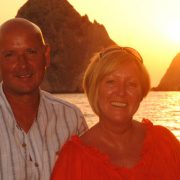 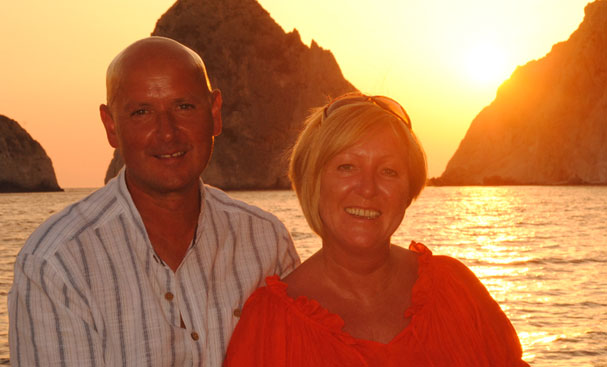 Hi, my name is James but I’ve got used to everyone at Alpha House calling me Jimmy. I’m 52 years old now but I started drinking at age 14 and then drank for 35 years. In all that time I cannot honestly remember a day when I didn’t have a drink.

My drinking progressed to astronomical amounts until around August 2012 when I was diagnosed with severe depression. After being brutally attacked and left for dead on my holidays I was then diagnosed with PTSD. This all stopped me from going to work.

My drinking and mental health issues and two suicide attempts caused a separation from my long term partner leading to homelessness. You can imagine the state I ended up in.

I managed to get into detox at TTP in Bradford on 14th October 2013 for alcohol dependency and this led to my counsellor contacting Yvonne and Miles about my aftercare. I was collected from TTP on 24th October 2013 by Yvonne and brought to Alpha House.

I was assessed and given a Care Plan and introduced to a recovery programme. I decided to give it all my best shot; I’d had enough. I started to attend groups, had one-to-one sessions and started to attend AA meetings as well.

I started therapy sessions at Insight to deal with my mental health issues and a little later attended and completed the pre-recovery and abstinence programmes at the Basement.

By December 2013 I had moved into one of Alpha Houses’ flats and things started to change for me.

A big bug bear was that I had not had any benefits since July 2013 and I was penniless. In March 2014 Yvonne accompanied me to an ATOS tribunal meeting which went in my favour and I finally started to get benefits after all that time.

Things seemed to start really improving after that problem was solved. My mental health certainly improved, my faith in God increased and my whole outlook on life was improving day by day. My recovery had really taken off.

To date I have completed 12 different Training Courses at VAC and completed the Naltrexone SMMGP certificate and the “Engagement Champions Programme”. I have also passed the Health and Social Care Level 3 course. This has helped me to care for Fred, my partner’s Dad, who suffers from Alzheimer’s disease.

I became a Non-Executive Director on the Board of Trustees at Alpha House and served for 2 years and volunteered as a Mentor three and a half days at Alpha House so I became very busy with a very fulfilled life.

I have rekindled my relationship with Lynn my fiancée and we now have a much better relationship than we have ever had. Just recently we bought a house together which is almost ready then I will leave Alpha House as a resident and make the transition from Volunteer to paid worker as Administrator. More importantly, I will also be getting married at some point in the near future.

My life today is so different to how it was before I came to Alpha House. I know that I am a completely different person to the man who first arrived. I am so very grateful to all the staff at Alpha House and those at other services, especially the Basement Project and Insight; in fact, everyone who has had a part to play in my recovery.

I would really like to thank Yvonne, Miles and Fran because they have given me my faith in mankind and faith in myself. Today I can be honest and I can be the person that God
created me to be.

One day at a time, and keeping it simple are two of AA’s well know phrases and without adhering to these principles and living like this as well as working the rest of the programme, I know I would not have gone two and a half years abstinent from alcohol and not only abstinent but achieving my potential as a human being. I believe I live a fulfilled life at the moment, I am happy and content most of the time and I am trying to think of others above myself and my own needs and to give something back to society.

I expect it to keep getting better as I keep doing the things I’m supposed to do on a daily basis. Long May it continue I say. 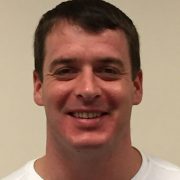 Hi, I’m Garry—or Gaz as I was known at Alpha. 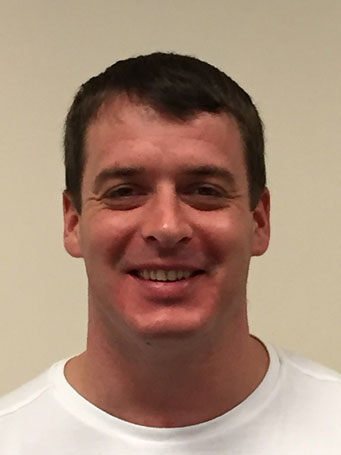 I went to Alpha House in March 2014 after getting myself in a mess with drinking and cannabis mostly. I’m glad that Yvonne didn’t put a “before and after” photo on here because I didn’t look as healthy as this when I arrived.

I started using recreational drugs when I was about 15 and started to really have a problem with my use in my early 20’s – using crack, coke and ecstasy and my drinking was getting worse. I think my main problem though was my massive cannabis habit. I was spending everything I earned on drugs of some sort and I was earning a lot of money bricklaying so it was as bad as you can imagine. I tried to commit suicide after my head went and I lost my job and my girlfriend and ended up back at my Mum’s.

Another resident told me about Alpha House and the good work going on there so he gave me Miles’ number and I got the courage to ring him.

It wasn’t all easy going—I took a few steps forward and a few back before I really got to grips with what addiction is and how I needed to live my life if I wanted to stay clean and get my life back.

So now I am on my way forward, I’m back bricklaying and earning money that does not go on drugs now. I have well and truly had enough of that life and I just want to live a good life and do the things normal people do like have a nice pad and go on holiday and drive a well nice car. 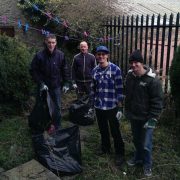 At Alpha House we are always trying to prepare our residents for independent living. Part of that personal development is around keeping a tidy house. Since our residents generally go over and beyond that by decorating and in some cases renovating their properties we decided to look for funds so that they could extend those skills by making their gardens nice.

We were fortunate enough to be awarded a grant of £10,000 from Awards for All to run a garden project so the guys have just begun clearing away debris, weeds and dead shrubs and bushes from their neglected gardens. That is not to say that our residents have neglected their gardens but that we have taken on properties with already unkempt gardens. Obviously the garden project has just begun but WATCH THIS SPACE as they transform wildernesses into beautiful gardens. 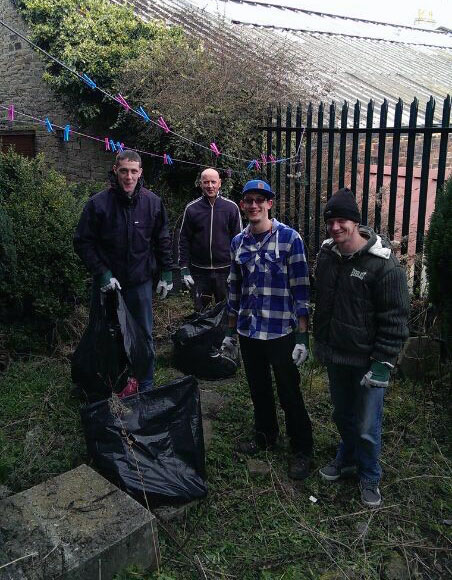